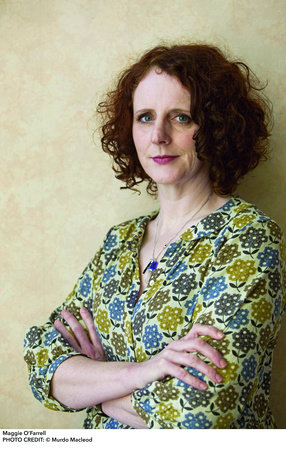 MAGGIE O’FARRELL was born in Northern Ireland in 1972. Her novels include Hamnet (winner of the National Book Critics Circle Award), After You’d Gone, The Vanishing Act of Esme Lennox, The Hand That First Held Mine (winner of the Costa Novel Award), and Instructions for a Heatwave. She has also written a memoir, I Am, I Am, I Am: Seventeen Brushes with Death. She lives in Edinburgh.

This Must Be the Place

Instructions for a Heatwave

Maggie O’Farrell’s latest novel, This Must Be the Place, takes readers on a journey from contemporary Ireland to Brooklyn in the 1940s and to many, many places in between. The story revolves around Daniel Sullivan, a thoughtful American linguist in a tumultuous winding relationship with Claudette, an internationally famous actress. Claudette is now a recluse, which of course only increases the public’s interest in her, and puts a unique strain on her relationship with Daniel. This Must Be the Place is a dive into the complexities of our own memories, and of our perceptions of one another. We spoke with O’Farrell about her love of language and travel, and what it was like to write This Must Be the Place.

PENGUIN RANDOM HOUSE: This Must Be the Place centers on Daniel Sullivan, an extremely intelligent and troubled man with a passion for linguistics. Daniel’s narration is infused with a keen attention to the English language; he is fascinated with and enthralled by why people choose the words that they do. Does this aspect of his character stem from a linguistic passion of your own?

MAGGIE O’FARRELL: I did a degree in English Literature but we were required to do a module in either a foreign language or something called the ‘History of the English Language’ (or ‘HEL,’ as it was known). Because my capacity for learning foreign languages has always been somewhat lacking, I decided to opt for ‘HEL.’ I had no idea what to expect but, within weeks, it became one of my favorite classes. We learned about the ways languages evolve and change over time, how the meanings of some words ameliorate and others undergo pejoration. The word ‘villain’ originally meant ‘tenant farmer’ but its meaning became distorted, through implementation as an insult.

Writing the character of Daniel, who is a linguistics professor, was a way for me to channel into the book my nerdish obsession with semantic change. I hope readers will forgive me.

PRH: You experiment with eclectic formats in the novel, most notably a chapter entirely made up of an auction catalogue of memorabilia. You use this as a means of fleshing out a romantic (and professional) relationship that co-protagonist Claudette Wells had many years prior to the start of the novel. Why did you decide to tell the story of her past relationship in this way?

MO: With this book, I had an urge to experiment with the form of the novel, to push its boundaries, to see what was possible with its remit. I knew I needed a chapter about Claudette’s metamorphosis from an ordinary girl with an office job to a film star but I was wary of writing it; it felt like a story that I had read or watched too many times. I wanted to find a way in that was oblique, unusual. I began to think about what Claudette would discard when she exits her life, all the things that would be left in her house, and I realized that people would want them. Claudette is famous when she disappears and film fans would pay money for her things. With the memorabilia catalogue, I was asking what kind of narrative our possessions tell about us.

PRH: Memory, and its faultiness, is a strong theme throughout This Must Be the Place. Since you utilize a multitude of narrators in telling Daniel’s and Claudette’s stories, readers are given a very full understanding of their pasts. I think it’s safe to say that readers have a better understanding of Daniel and Claudette’s lives than they do, and perhaps a better understanding than they would ever want to have. To what extent do you think we all rely on the notorious unreliability of memory? Do you think we need to push back against that unreliability?

MO: One of the best things about being a novelist is that you are permitted to look at a person or a situation from multiple viewpoints, from different moments in time. You have immediacy and hindsight, all at the same time. If only life were the same. Our perceptions of an event will naturally alter over time, as we get older, as we move further from the event itself. I think we undergo a constant reassessment of our pasts and our selves, all the time; our minds are always sifting and puzzling over conundrums from own lives, and from others’. This Must Be the Place is a novel about such reassessments: Daniel is forced to confront something he would rather forget. He dives into his past without realizing that this act will of course destabilize his present.

PRH: This is quite the international novel; you take readers on a journey from contemporary Ireland to Brooklyn in the 1940s and to many, many places in between. The sense of place is always strong, no matter the setting. Did you only include places you’d been to and lived in yourself, or did much of your place-based writing stem from research?

MO: I’ve visited all the places in the book: I would never be able to write about somewhere I hadn’t been. It would feel very wrong to reconstruct a place from research or maps. I used to go on holiday to Donegal, where the novel starts, when I was a child. I went to the Bolivian salt desert, the Salar di Uyuni, in my late twenties; it was such an astonishing, unlikely place that I knew I would write about it at some point.

PRH: Claudette Wells is the epitome of what we have come to call ‘the manic pixie dream girl.’ At the height of her fame as one of the most famous actresses in the world, she vanishes from the public eye so thoroughly that she’s presumed dead. This, of course, only intensifies the public’s obsession with her. Your searingly truthful and probing narration, however, refuses to allow readers to see her as anything more than another human being. Why do you think the manic pixie dream girl is so attractive to us, both in real life and in fiction? Why do you think it’s important to try understand people complexly?

MO: I had the idea of writing a novel about a recluse several years ago. Several years ago, I was in a cafe in Soho, London, when I became aware that everybody in the room was staring at the woman sitting opposite me. She was, I realized, on closer inspection, a very famous actor. The very air around her seemed to crackle with curiosity, with fascination. It was like sighting a gryffon or a dragon: a mystical creature so familiar to us and yet so strange.

Everyone was pointing at her and taking pictures on their phones; outside the window was a bank of photographers, banging on the glass, shouting her name. It seemed to me a life of untenable misery and, as I left the cafe, pushing my way through the paparazzi, I thought if I were her I would fake my own death and run away.

Writing the story of Claudette in This Must Be The Place was an attempt to humanize and understand such an act. What would drive someone like her to withdraw from the world? How would she pull it off? Would she miss anything she left behind? What would such a life be like, after the initial escape?

The MPDG is a peculiar label and not one I would ever employ; it’s an epithet designed to cut down women and women characters. Hasn’t Nathan Rabin, its originator, since disowned it?

PRH: In a similar vein, your epigraph (“World is crazier and more of it than we think, / Incorrigibly plural.” – Louis MacNeice) can be taken as an argument for acknowledging, to borrow and bend Whitman’s words, that the world contains multitudes and so do all of the people in it. In your novel, you don’t devote chapters only to central characters; you also flesh out the stories of peripheral characters. Why was it important to you to give each and every character a story?

MO: I wanted to write a big book, both in terms of geography and chronology and word count. I was fascinated by the idea that there is no one single truth about any event. Everyone will have their own perspective, their own interpretation. The MacNeice quote is from one of my favorite poems, ‘Snow,’ which is about the vertiginous, dizzying multiplicity of one man’s viewpoint.

PRH: This Must Be the Place ends on something of a cliffhanger. Would you ever consider continuing the story? What other projects lie ahead for you?

MO: I’m not sure I would ever return to the characters in This Must Be the Place — but I wouldn’t ever rule it out. You never know what’s ahead of you. That’s part of the joy of writing.